I often think about my habits and their long-term effects. Lately, I've been giving particular focus to my money-saving habits. It's one of those things that's immensely powerful and easy to do, but also something that's easy to miss / forget about until it's too late.

At 25, I think it's high time that I get all my assets in order so that I'm charting the best course into the future I can and making the most of "the most powerful force in the universe".

One move that's been on my radar for awhile is starting to invest in Roth IRA / traditional IRA. Over the last few months I've slowly been learning more about them and today I decided to sit down and really understand the pros / cons which eventually led to me re-allocating funds to them.

Here I'm going to list what I know (or at least think I know) about them as well as my calculations for how they benefit me for posterity. I'll note that I am by no means a tax / investment expert so take this as a snapshot of my knowledge but not as a recommendation / guarantee to you. In other words, do your own research and don't sue me for anything I say here cause I don't know if any of this is actually right.

The main differences (that I saw) were:

I hit the income cap so IRA is out of the question for me, so diving into Roth IRA.

The Roth IRA is a tax-efficient vehicle in two ways (remember it doesn't get up-front tax deferrence, which is why it's not listed here):

I mostly use Vanguard index funds which they say is a tax-efficient holding by nature so, for me, the real benefit lies in the tax break on long-term holdings.

So basically the difference for me between Roth IRA and my normal investments ins the 15% break on earnings.

Let's see how it plays out over 15 years (I like this time frame cause I'll be 40 then and that seems like an "adult" age so it's the money I could have by #adult time, plus it's long enough to actually see systemic differences).

Let's say that I'll invest $500 / month that was going to a taxable Vanguard to instead go to my Roth IRA. We'll say I'll invest that money in the same fund to keep things simple.

The value of my savings is then calculated as the capital gains I would realize over the period of investment, multiplied by the tax rate of 0.15. I don't want to do all the calculations by hand so I built a new calculator into thevalueofmoney that calculates this for me. 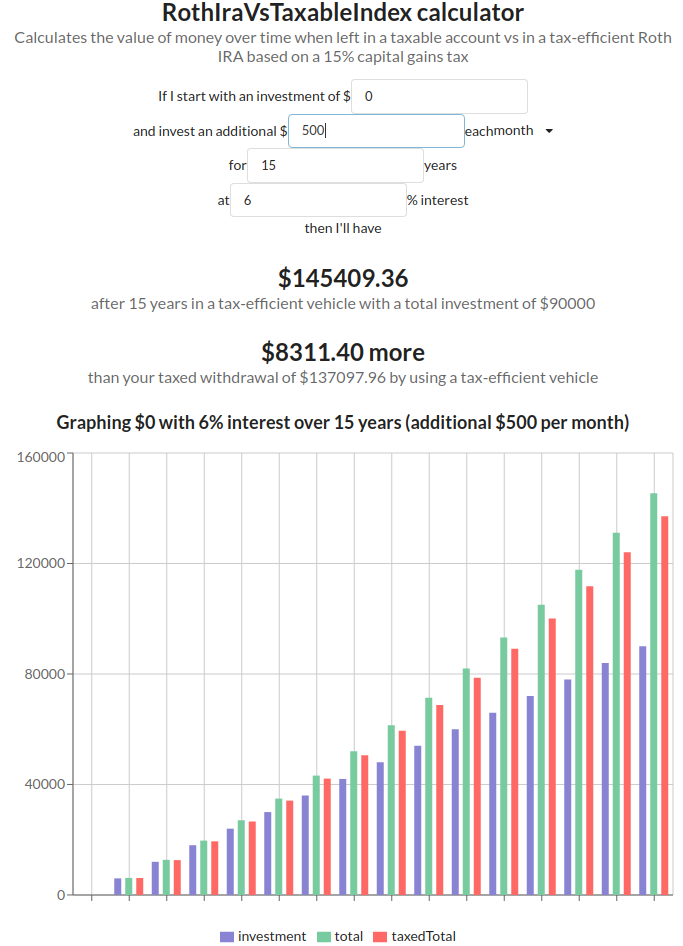 With inputs set as: 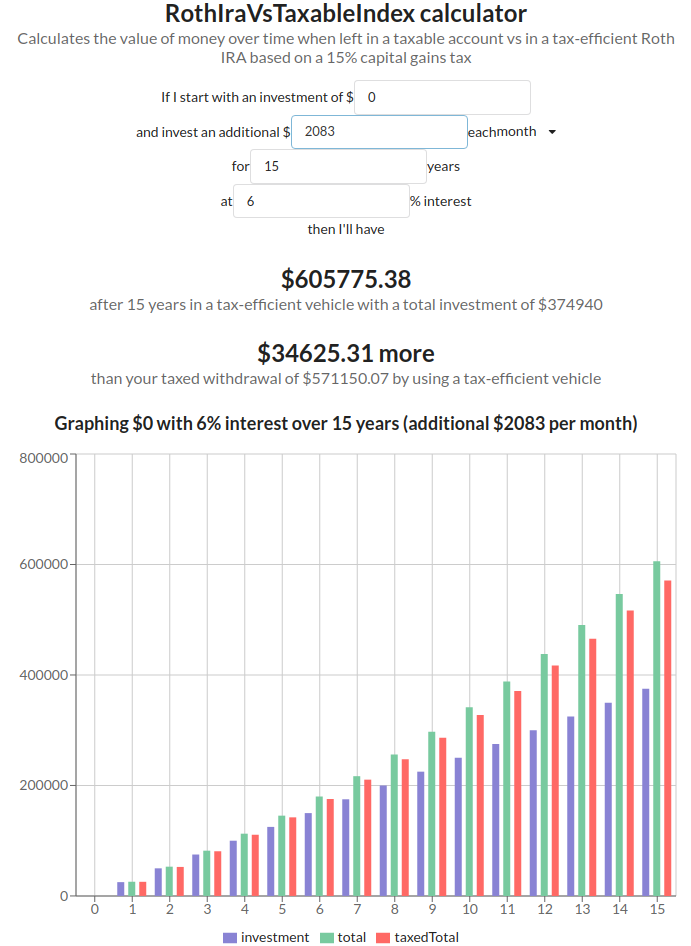 If we went above the $6k / year, up to let's say $25k a year, the savings increase proportionally to about $34k. I'm no where near doing this, but if you could it'd be like making an extra $2,200 each year just by using a tax-efficient account instead of a regular one.

So Roth IRA definitely seems the way to go. It's a bit more efficient and while there's a cap, I'm way off from hitting it so might as well squeeze a little extra goodness out where I can.

Over time, I hope to increase that investment and approach the second figure in savings. #fingerscrossed