In this post we're going to be comparing and ranking the top F# frameworks for backend web development.

For this comparison, we're going to implement some requirements to help narrow the field and ensure we get good signal:noise.

Candidate frameworks that fit all these requirements narrows our list quite a bit:

In order to compare and rank candidate frameworks, we're going to use a few proxy measures for performance and usage. This is less comprehensive than individual, direct reviews of each framework but it's also a lot more concise and in some ways a bit more objective. I would still encourage you to take a look at each but this will give a good survey of the landscape.

The first category we'll be looking into is usage. This is generally a proxy for technology adoption and how much you can trust ongoing support.

The second category is performance. Performance is rarely the most important thing in your app and performance benchmarks are filled with asterisks but it's definitely something you want to be aware of so it doesn't bite you later on.

Now that we've got our experiment setup, let's crunch some numbers.

Falco wins out but is closely followed by Giraffe and then Saturn. While Falco is a newer framework it's done well in many different kinds of benchmarks.

Note: Suave scores surprisingly low in performance which may indicate something's wrong with the benchmark though it also performs poorly in TechEmpower - Plaintext so could just be slow. I noticed a similarly weird result in Giraffe which led to: Improving F# / Giraffe web benchmarks by 6.56x 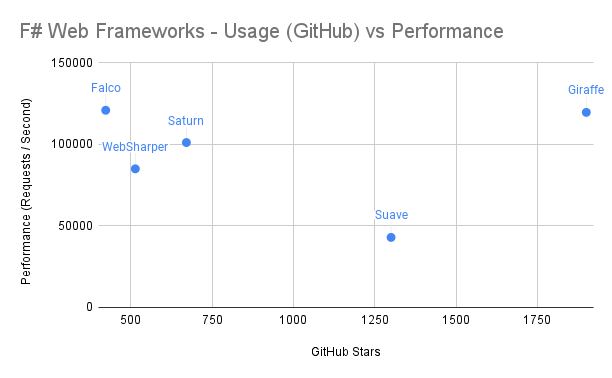 Giraffe and Suave are by far the most starred projects on GitHub. Saturn is in third which makes sense as it's in many ways a simplified version of the other two, built on top of Giraffe. 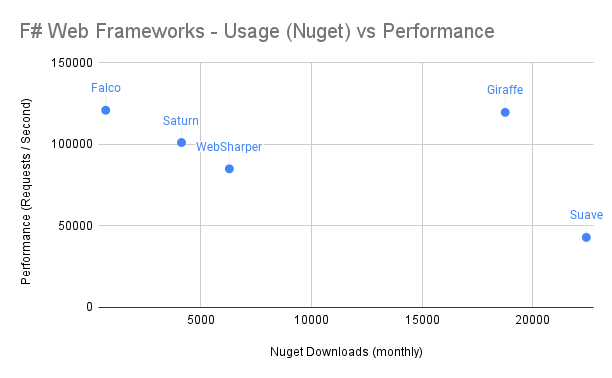 Suave and Giraffe again take the top spots with far more downloads than the other candidates combined. WebSharper comes in third but it's unclear if all of this is coming from F# usage or some C# usage.

Now that we have all the data, we can tabulate the top F# backend web frameworks for 2023.

F# is my favorite general purpose programming language and is my go-to for building new projects / businesses. If I had to recommend one framework I would rec Giraffe but any of these frameworks should give you a decent start.