In April 2021, I traveled to 3 different cities, hit my worst savings rate on record, changed my projects goaling strategy, released a Monolith I actually like, and published a YouTube video.

My name is Hamilton and this is my April 2021 in review.

I had some great adventures this month. I finished off my travels around the southwest, flew to Miami, then had a stint in Atlanta. I didn't get much sleep but I did get to see a lot of new things and hang with a lot of great people.

I've also got several more trips lined up through the rest of the year that I'm excited to embark on:

Now my travel adventures weren't all pros, no cons. This level and manner of traveling had some direct negative impacts on my overall health and financial situation. I think that can be a fine tradeoff - and in this case I would definitely say it was - however I don't think it's sustainable for me long term and is something I'll need to keep in check.

I'm giving myself a 4/10 rating as my health was okay but my finances were really, really bad. I'll need to improve both if I want to hit my goals and

The biggest sustainability hit I took in April was to my finances. This month I logged a savings rate of just 16% - the lowest savings rate I have on record (since the beginning of 2020) and far below my target rate of 70%. 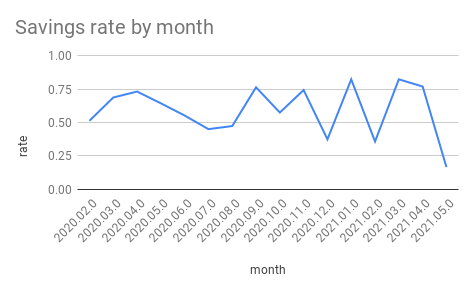 This abysmal rate was driven by two factors: 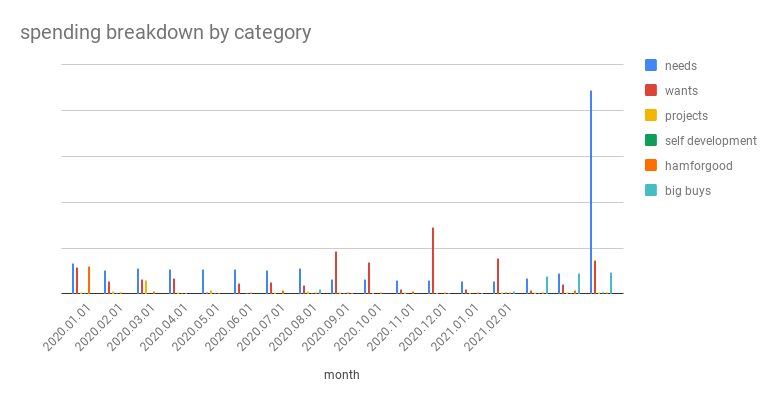 It brought my average monthly savings rate to 53% so I'll need to make some changes in order to hit my savings goals for the half.

To tackle my large spending on travel and entertainment, I plan to spend less:

For my tax bill I don't have a great approach right now. I could start paying in small installments but I don't think I was penalized for waiting to pay so doing so seems like giving away free money. For now I think I'm going to boost up my emergency budget to be able to body the same sized tax bill next year and hopefully will make some returns from the money I hold a few months longer.

I did start going to the gym and running a few times a week again. Which is good.

Traveling disrupted my exercise routines. Which is not so good.

I did make it a point to still exercise regularly while traveling however those routines weren't as broad or deep as my normal ones and also weren't as structured, making it hard to build habitual momentum from them.

I'm hoping to get back into some systemic exercise and get this body ready for summer (and hopefully rediscover that 6 pack!).

I overcommitted this half. I set some really ambitious goals for myself and not only missed them but also drove my personal productivity into the ground.

I think it was the right move to turn away from my projects in favor of traveling and mentally surviving these past few months but it's time to start looking forward and thinking about how I'll start to regain my momentum.

I don't have a great solution just yet but I have been doing several tweaks to my goaling and execution systems that I think are on the right path.

For starters I'm going to be focusing on just 1 project each month - be it an art piece or business venture. The goal will be to build 3 of each each half. This should hopefully free up some headspace to focus on actually building while still netting a pretty impressive number by year end.

The next change is to my schedule. I've created a very rigid schedule for myself that overcommitted to project time. I feel that structure is too rigid to be optimal so I'm deallocating time on Thursdays, Fridays, and Saturdays to be used as necessary rather than locking myself into a set schedule. The hope there is that this will rebalance some of my allocations and prevent this kind of burnout from repeating for sometime.

I don't think this is a perfect solution but it feels better than my previous one so we'll iterate from there.

I didn't build a business in April either which means we're now in the middle of May with 0 businesses built. I'm pretty set on getting at least one built this half and am planning for that by goaling on one in May.

I'll be putting the new systems mentioned above and my new fave tech stack discovered when killing LineTimes to work in this endeavor.

I am ever so slowly releasing new art to the world. There are a few things in my way:

But we are making progress. I've finally released a Monolith instance that is a representation of something I'd envisioned - Cube | Monolith of Autonomy.

I'm hoping my increased focus on a single project and additional experience in my tech stack will help overcome some of these obstacles and help me move my art where I want it to be.

My sharing practice is largely driven by my projects so it should be no surprise that I haven't been sharing much lately. Somewhat surprisingly, this lack of new sharing doesn't seem to have affected my viewership much (~4,100 users / month) - though it is still at a pretty low number compared to previous years. 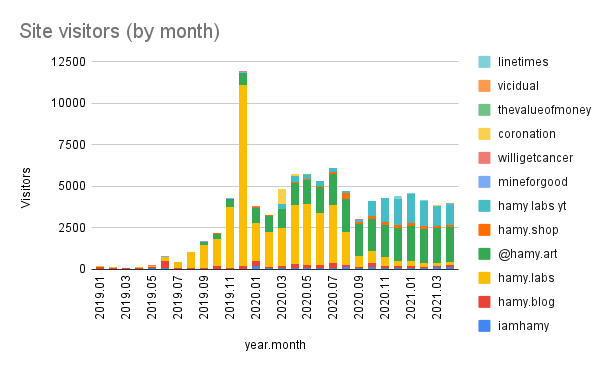 I've thought a lot about it and I think sharing 1 thing / week is good for me. It forces me to think about why I'm doing something and how I can share that with people which is overall a good skill / practice to have.

I'm going to try to stick to that in the coming months as much as I can. We'll see.

New video out this month:

All in all I'm a bit behind at work. This is due to a myriad of factors but I'd be remiss if I didn't admit many of them are personal:

These next few weeks will be crucial to achieving and surpassing my normal productivity output. I'm pretty confident I can do it - I just need to actually do it. I have a feeling that the success of this effort will track closely with the success of my efforts in my other focus domains. Stay tuned for reports.

It's the middle of May and I'm just writing my wrap up for April. That's about how it's going.

I think I'm doing better than the previous few months but that bar is so, so low.

I'm excited for Summer and can definitely get this train back on the tracks. If I just do it.